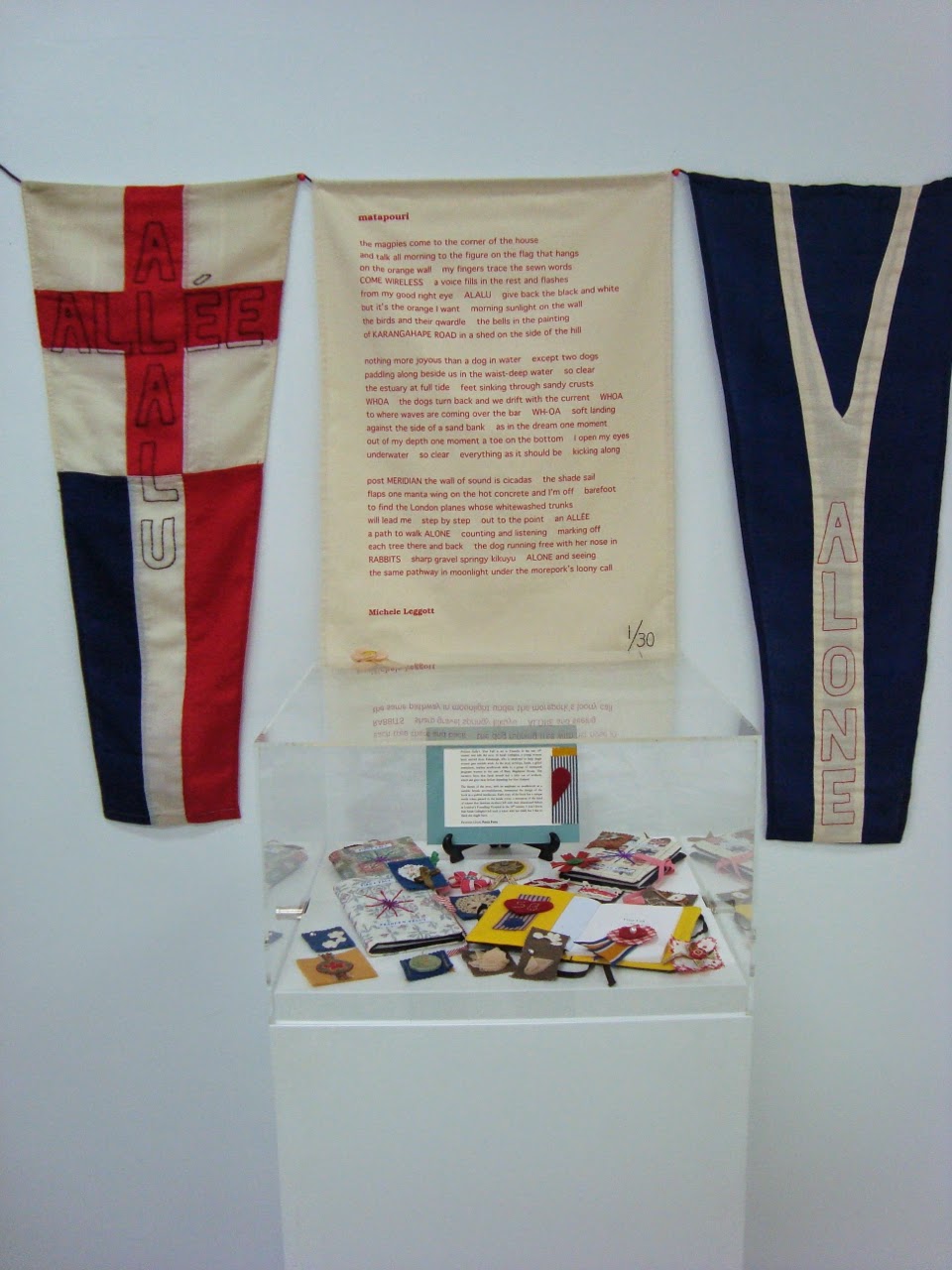 In the exhibition associated with the Art + Book Symposium that I took part in at the Dunedin School of Art last October I displayed the prototype textile poem of Michele Leggott's poem 'Matapouri'. 'Matapouri' is the final piece in Michele's latest collection Heartland, which was published by AUP in 2014.  Here's the poem:

matapouri
the magpies come to the corner of the house

***
I've been working with the idea of turning the text into a limited edition Pania Press textile poem, and I began by having the poem printed on 30 unbleached cotton tea towels. 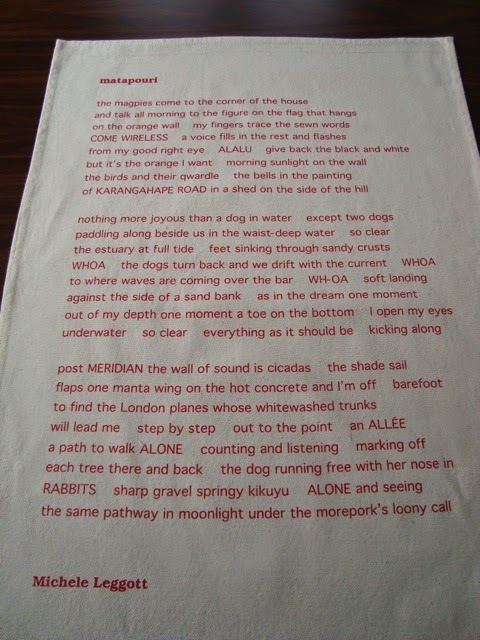 The reason for designing the piece as a wall-mounted textile was inspired by the content of the poem itself. The first stanza of ‘Matapouri’ describes the poet’s experience of tracing the sewn words on a flag hanging on an orange wall. The flag she is referring to is the textile poem 'Macoute' by fellow poet Leigh Davis (1955-2009), which is the middle flag in the image below from Davis's 1998 exhibition Station of Earthbound Ghosts at the Auckland Central Railway Station. 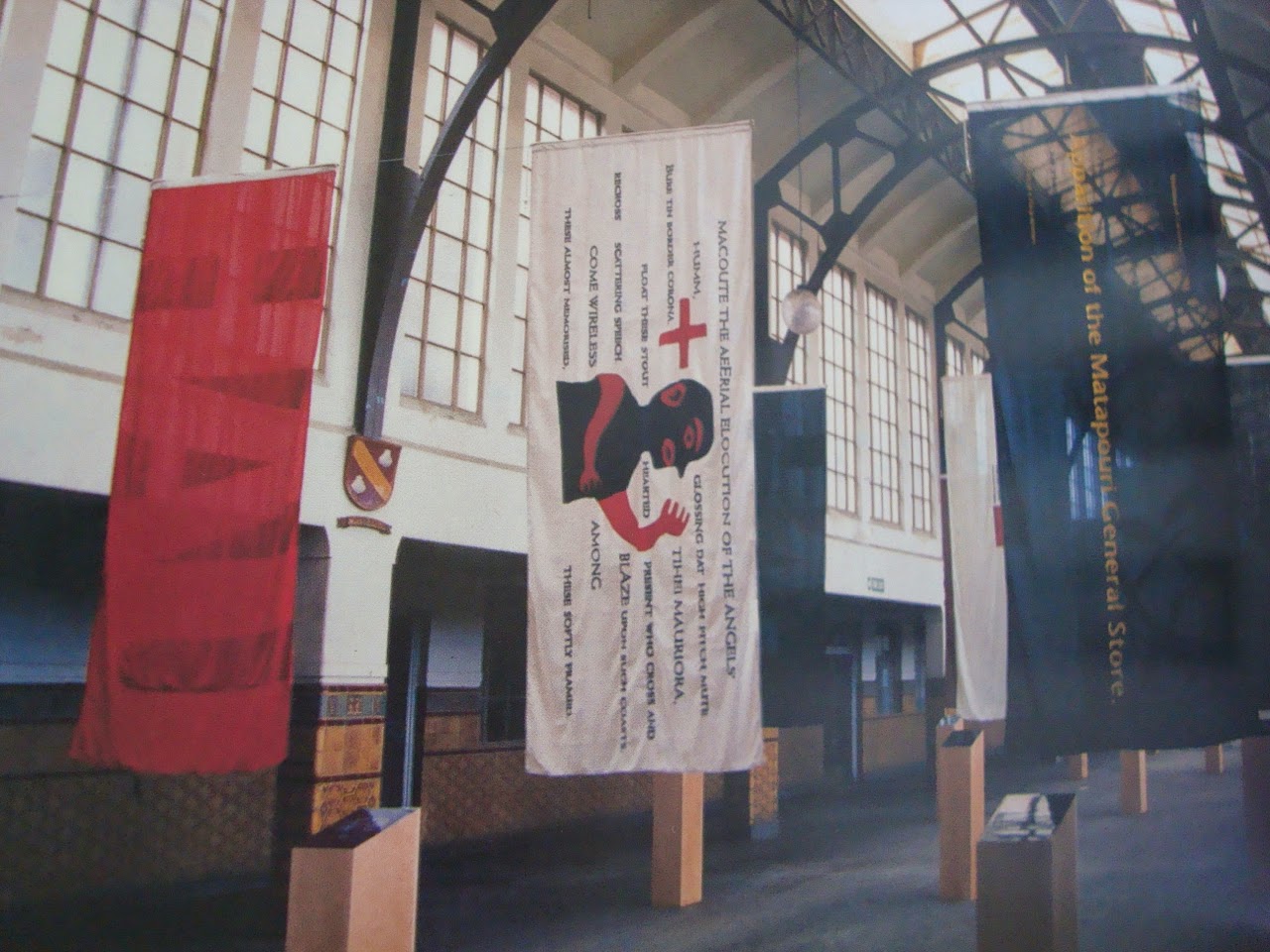 The Macoute flag is the piece that Michele was engaging with in the poem while she was staying at Leigh and Susan Davis’s home in Matapouri.

When Michele sent me the poem I seized upon the idea of making a wall-mounted piece in response to her poetic response to Davis’s flag, and serendipitously, I happened to come across a box of vintage flags in my father-in law’s basement to work with. 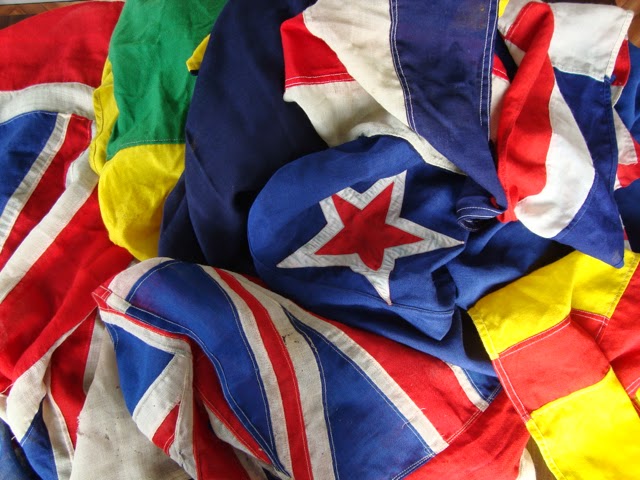 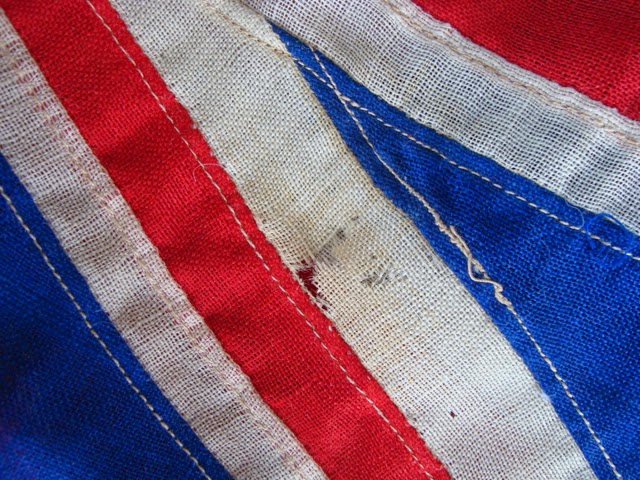 I also fixed on the idea of sewn words, picking out three of the capitalised words in Michele’s poem: Allee, Alalu, and Alone. The latter preoccupation is because Michele is now almost blind, so I wanted her to be able to feel the sewn words of her own poem.

I used an existing pennant flag with a red cross at the top, which formed a nice link to the red fabric cross in Davis's poem and I embroidered the words Allee and Alalu in a cross formation. 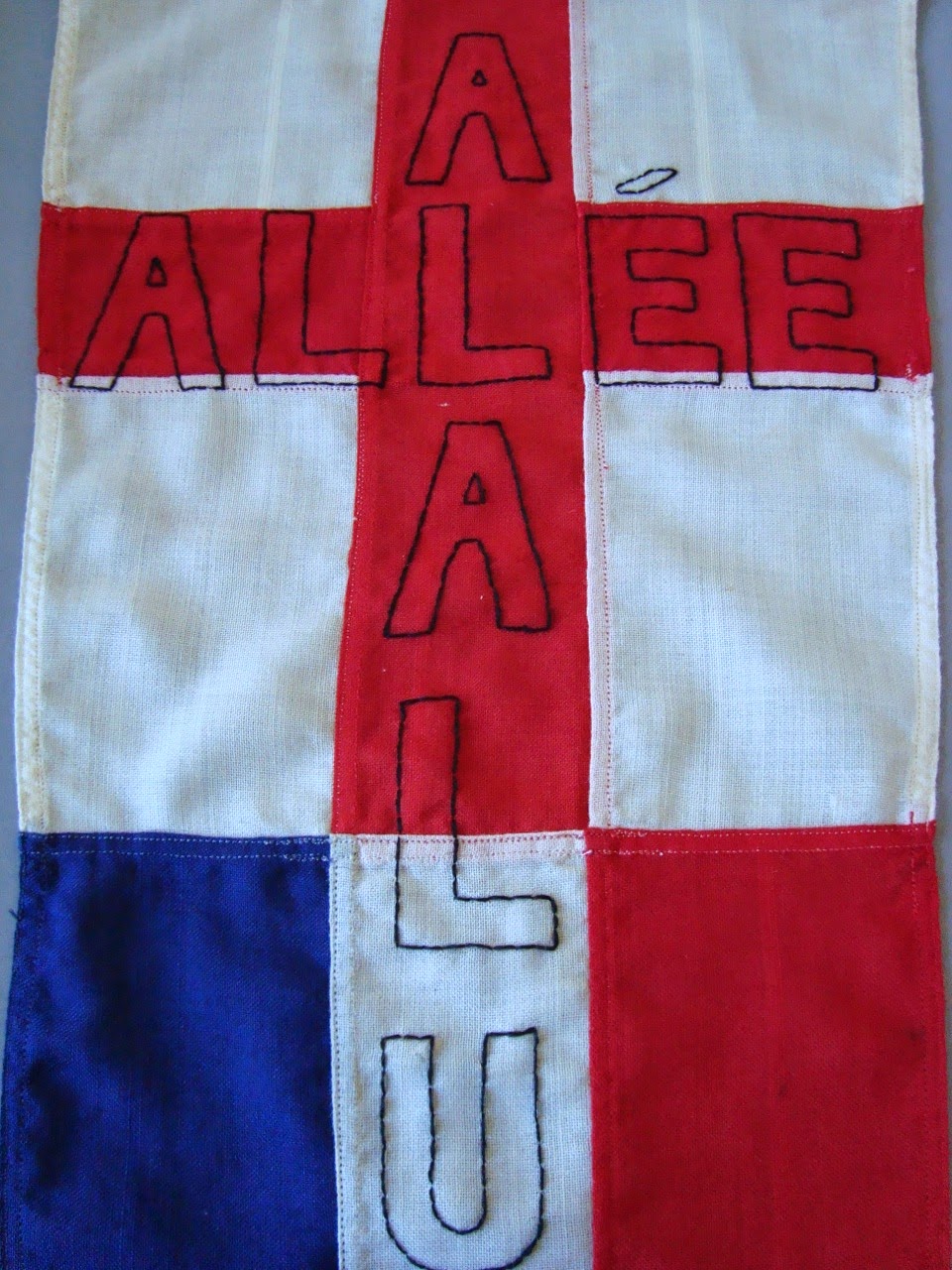 I made a second pennant flag from the blue section of an old New Zealand Flag and sewed the word 'Alone' to a representation of the whitewashed trunk of a London Plane tree that the poet describes in the final stanza of the poem. 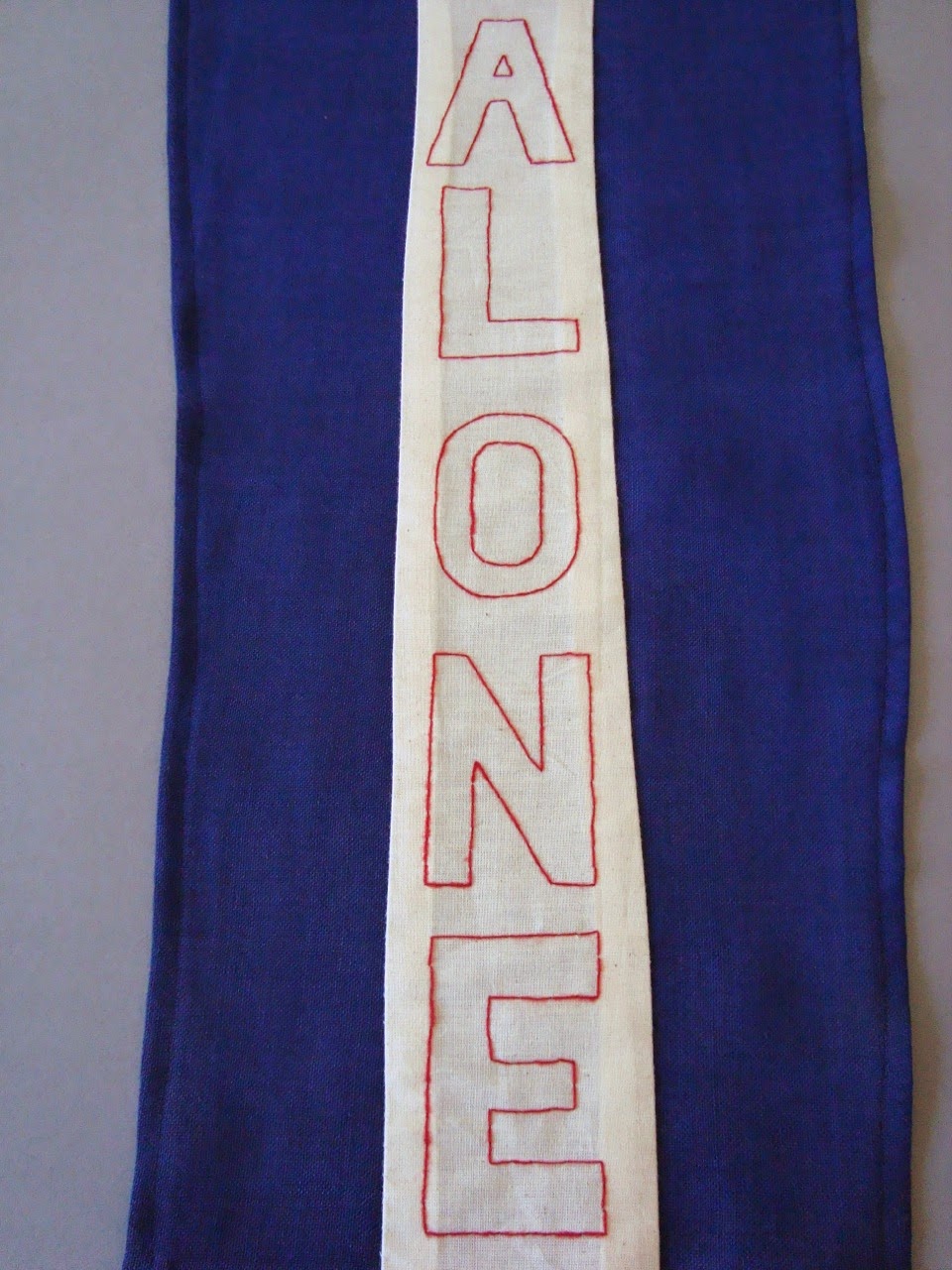 I positioned the two pennant flags alongside the printed text and attached a cord to the top to mount the piece on the wall. 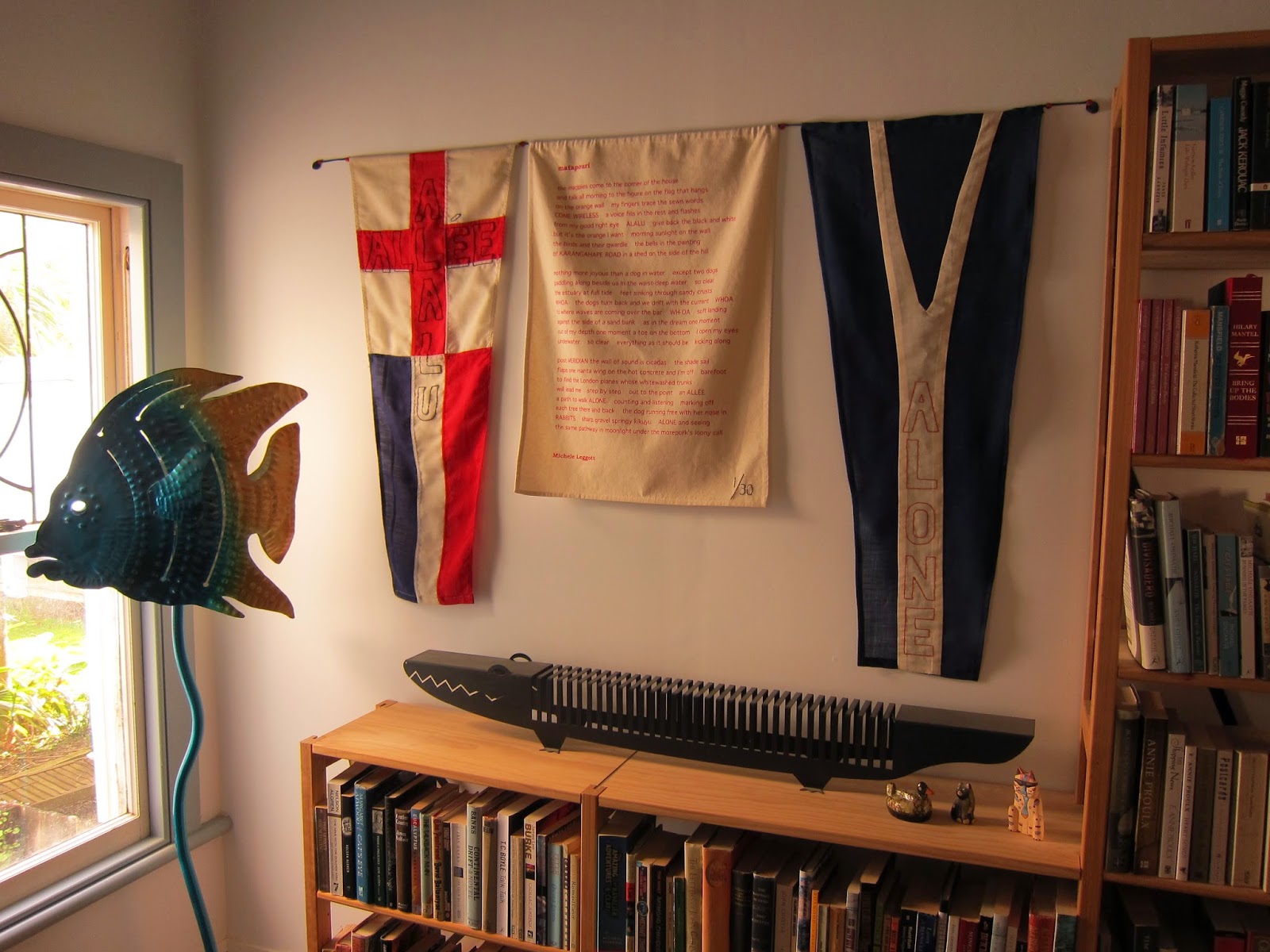 I gave the prototype to Michele as a birthday gift where it now hangs on the wall of her library (above).

Now that the weather is beginning to cool, and I can spend a decent amount of time in the studio again, I'm about to begin the process of developing the 'Matapouri' edition. The design will still feature the textile poem flanked by two pennants, but I won't be using the vintage flags for the edition because I don't have enough of them to make 30 pieces.

Instead, there will be three narrative panels that trace the movement of the poem from morning to noon to night and three text panels with the embroidered words Allee, Alalu, and Alone.

What I really want is to create a piece where the text and image work together harmoniously, like the Holloway Press book Journey to Portugal (2007) where a series of beautiful chine collé images, designed by Gretchen Albrecht, and made by Elizabeth Steiner, illuminate Michele’s lyrical poem. 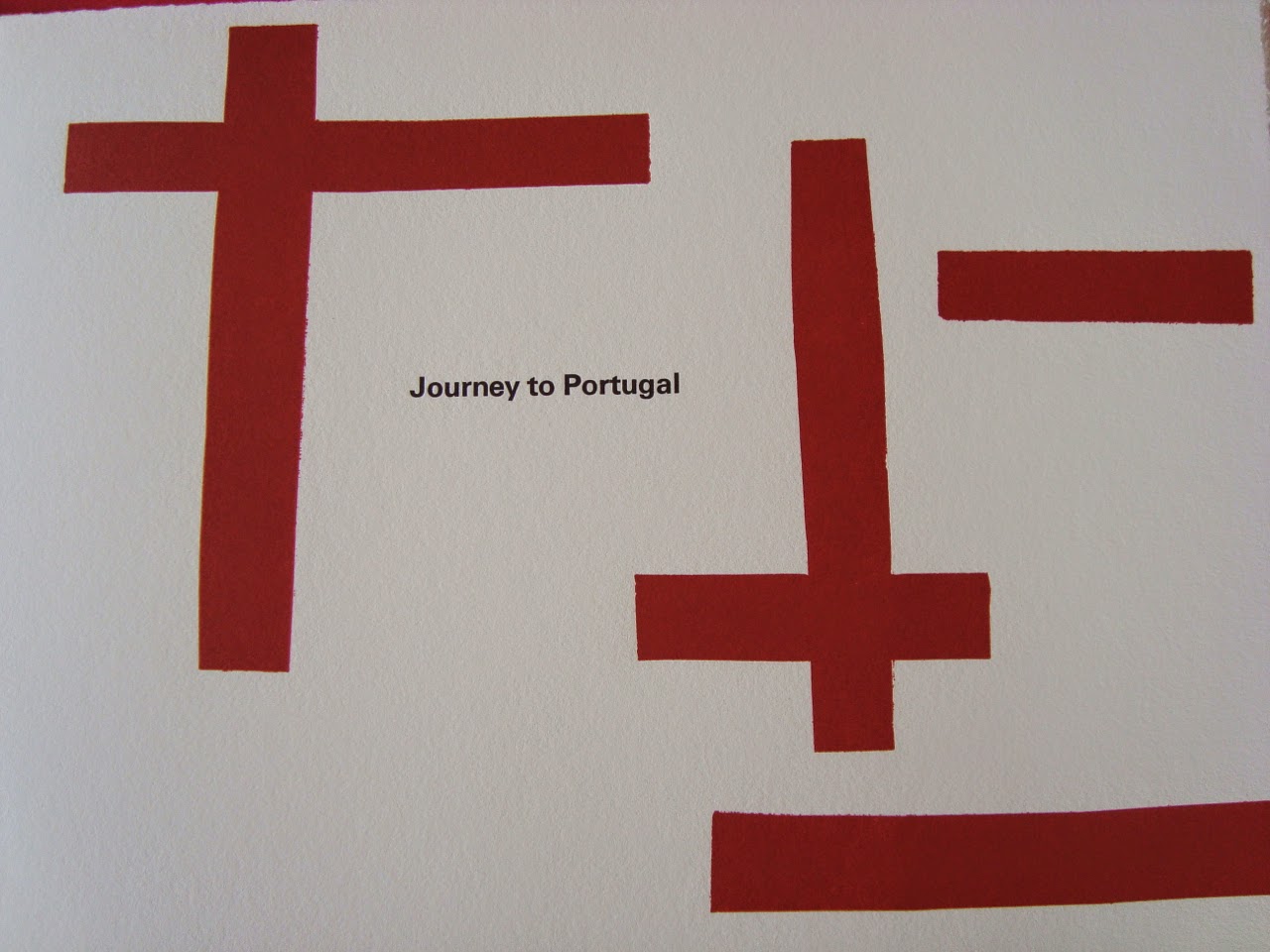 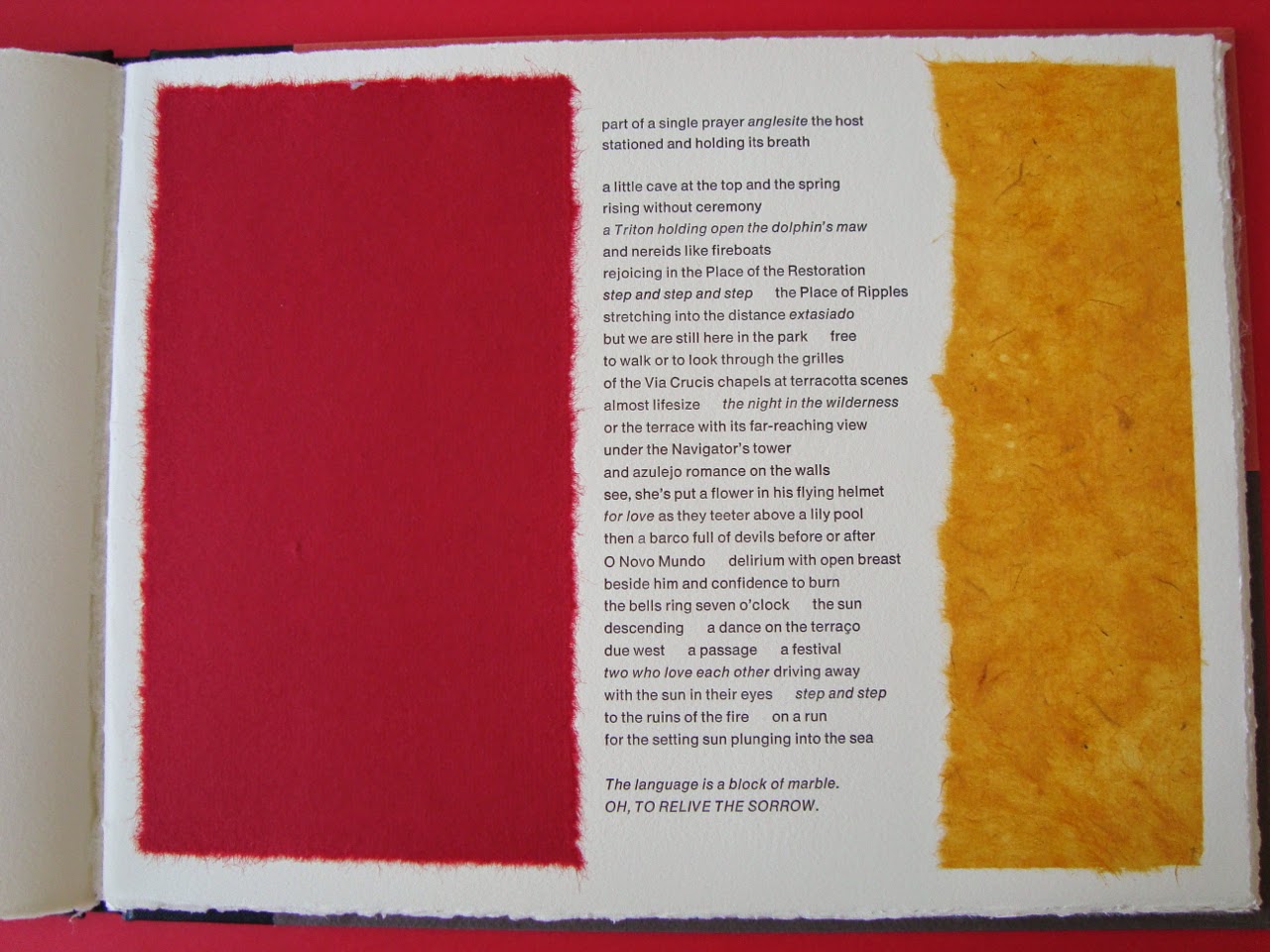 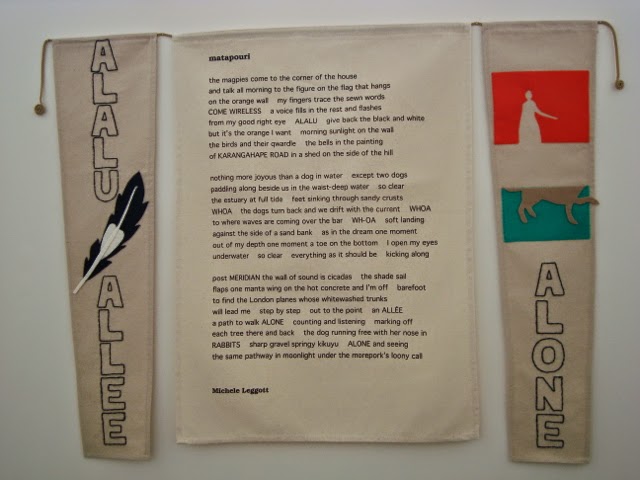 The poem is flanked by two cotton pennant flags. 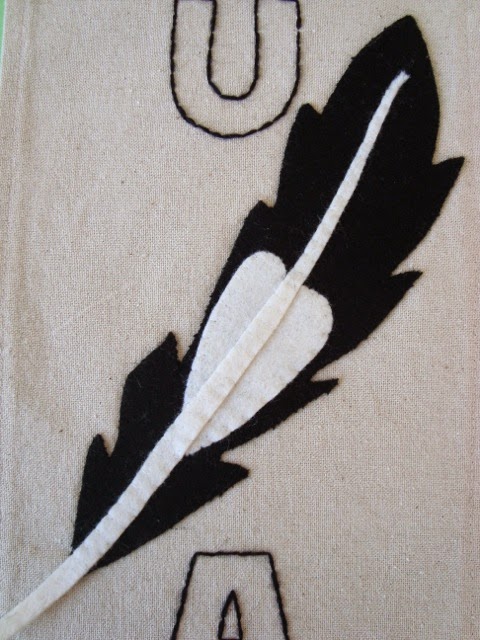 The left hand flag has a felt magpie feather separating two of the capitalised words from Michele's poem, which have been hand-stitched in black wool. 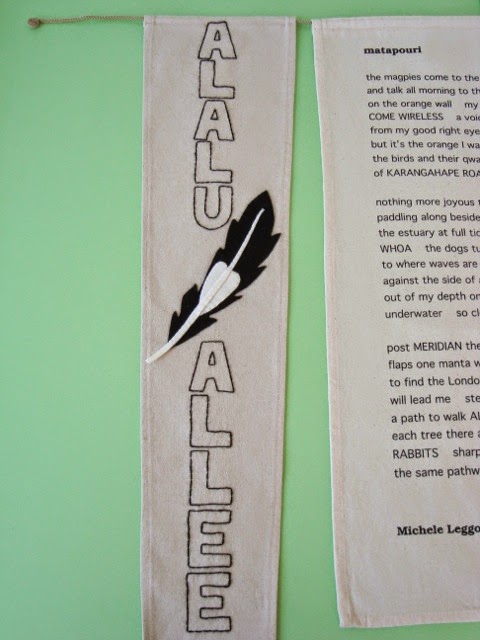 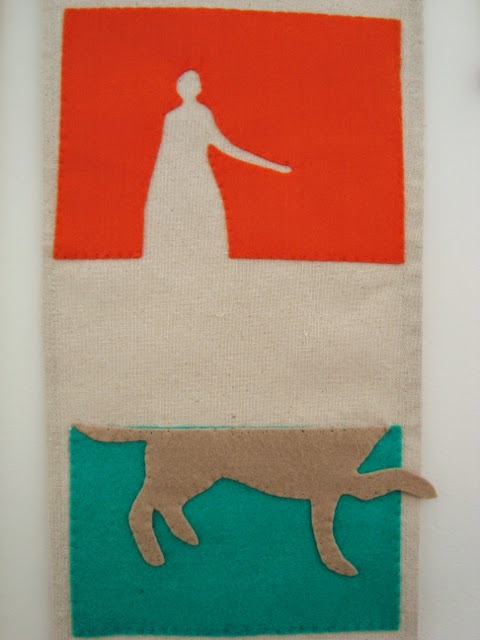 The right panel features two graphic elements. The top image is a female figure against an orange ground. In the poem, Michele is looking at a flag hanging on an orange wall, and she writes about how much she misses being able to see the colour orange. I've represented this by extracting the figure from the orange ground.

The second image also plays with perception. The poet writes about the way that her partial vision means that her mind has to fill in the blanks, so I've made a cropped dog swimming in the sea and the viewer has to fill in the absent part of the animal.

I'm pleased with the prototype and I think an edition of 20 will be achievable. I hope to get some made during the break from teaching over Easter, so I'll let you know when the edition will be available for sale. 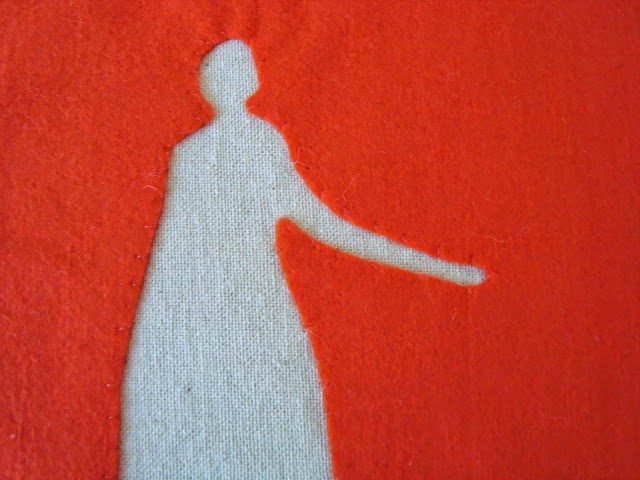