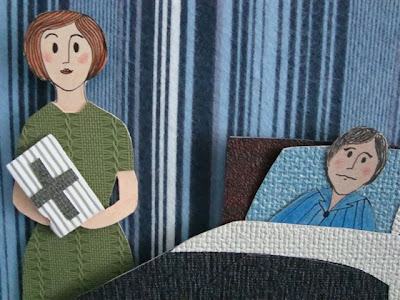 Shutting her pious book, the Mother rose
and kissed her little boy ... what mother sees
in Angel-face, his big eyes free of guile,
bile and disgust tormenting the nude soul?

All day long he sweated to obey;
clever, quick, yet something seemed to say
- little habits, tics - that this was sham.
Alone in mildewed corridors, he would scream
shit-fuck! clench his fists, stick out his tongue,
screw up his eyes into a blood-red sun.
A door opened on darkness - the backstairs,
the one place he could lie and gasp for air
in the dome of a day a lamp hung from the night.
Burnt stupid by blank waves of summer heat
he hid himself inside the dank latrines;
there he could breathe - sniff something that was clean!

In winter, when the moon washed their back yard
with icy candour, he would creep out and hide
by the stream that ran inside their boundary wall;
trying to see by knuckling at his eyeballs,
he heard the pine-trees groan like ships at sea.
Although he felt some sneaking sympathy
for those trespassing kids who dropped their eyes
at his approach (stink-fingers black and creased
with yellow clay from damming up the creek),
they turned from him like dolts and would not speak.

And if his mother caught him at this game
and told him off, the fact he looked ashamed
fooled her into forgiveness. He was shy.
Those lips were always ready with a lie.

At seven he made up Westerns: wild romances
set in the desert - where freedom reigns (and Dances
with Wolves?); sunsets, rivers, cliffs, savannahs...
Staring at naked woodcut senoritas
till he turned red, he dreamt of foreign girls.
So when that saucy eight-year-old, her curls
bobbing, thin cotton dresses ... like a squaw
with soft brown eyes ... came over from next door
and jumped him - little beast - pulling his hair,
caught underneath, he bit her on the bare
bum ("wild women never put on drawers!");
then, scratched and beaten by her fists and claws,
he carried the scent of her back to his room.

Most of all, he feared Sundays at home,
brushed clean and collared, sitting with his back straight,
reading about a God he'd learnt to hate
in a mould-green Bible with a faded back;
the nightmares came as soon as it got dark.
He loved to watch those swart, roughly-dressed men
straggle home from work in the red evening
ready for the distractions of the streets
- his dreams were of wide prairies of ripe wheat:
gold thistledown, rich scents, in the calm light
of noon, till rough winds swept them out of sight.

He fixated most on things that were dark and old -
sitting in a cold blue room with the blinds pulled,
damp dripping off the walls, mouthing the words
of a story he could see inside his head
full of drowned forests; leaden, ochre skies;
flesh-haunted flowers; starry immensities;
despair; retreat; stiff salmon-leaps; and pity!
Engulfed by the vast engine-grinding city -
lying in the creased haven of his bed,
he bent his sails where a blind future led ... 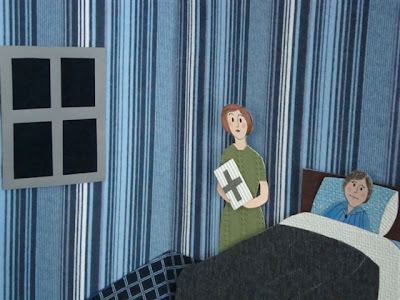 Such a great poem! As you can see it's loaded with imagery with great pop-up potential.

I've started on the first flannel board spread for the textile book. I took advantage of the sale at the Warehouse last weekend and stocked up on striped and floral flannel pyjamas and sheets to cover the backing boards. What you see here is part of the first stanza, but I'm about to weird it up by adding lots of tendrils coming from the boy's bed, which will be connected to his nude poetic soul, who will be crawling away over the opposite wall and into the next spread.

I just have to work out what the inner poet of a seven year old boy might look like...
Labels: book design Rimbaud 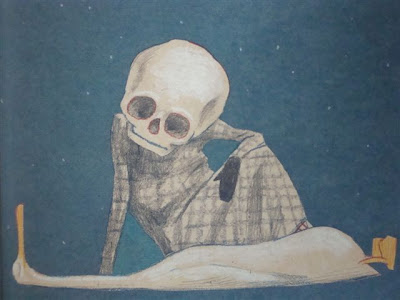